In 1922 the former mayor of Cologne, Konrad Adenauer, had already laid the foundations for the Rheinhallen with the initiation of the Cologne Trade Fair Company. The complex of buildings, protected as a historic monument, directly next to the banks of the Rhine in the Deutz district of Cologne was a trade fair venue from 1924 to 2005. Despite numerous refurbishments and modernizations, especially after World War II, the uniform brick building of 1928 can still be recognized, having dominated the panorama of the right bank of the Rhine for decades.

In 2005 the Rheinhallen was handed over to the City of Cologne. For the new main tenant, the media group RTL, including TV networks RTL, VOX, Super RTL and the news network n-tv, the interior of the original halls was completely stripped out. Two four-story buildings were inserted into the existing facades as part of the conversion. The Condair ESCO pressurized steam distribution system guarantees hygienic humidification of the highest standard. 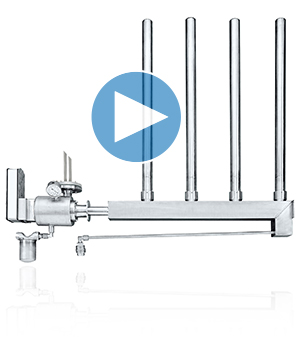 Condair ESCO humidification systems for existing steam set the standards. The key element is the TÜV (German Technical Inspection Association) certified steam connection unit. The functional elements are fully integrated into it, in a design that guarantees fault-free steam connection.

Costly seals and pipework are superfluous. Installation is calculable, quick and cost-effective. The modular steam distribution system with its patented steam nozzles needs no jacket heating. This effectively prevents unnecessary energy consumption even during downtimes. All seal points are included in the factory delivery. This simplifies the entire equipment installation significantly without running the risk of leaking pipe connections.