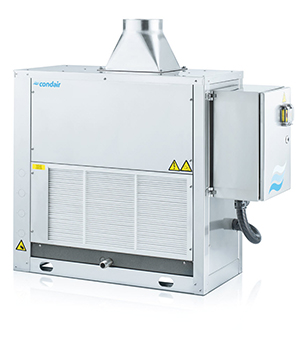 Introduction
In recent years, the generation of renewable power in offshore wind farms has developed into an important pillar of the green energy mix and is one of the great hopes for the energy transformation. In order for the many thousands of wind turbines operated in the North Sea and Baltic Sea to function safely in the long term, a maximum air humidity must not be exceeded in their operating rooms.

Therefore the air must be dehumidified almost constantly: Failures and repairs of wind turbines far out at sea are very costly and can lead to heavy income losses. This article explains the problem and its solution using the example of the Nordsee One wind farm, which went into operation at the end of 2017. It consists of 54 wind turbines and has a total output of more than 330 MW.

The strong and generally constant winds prevailing at sea make offshore wind energy lucrative. Due to the good conditions, the annual full load hours of offshore wind turbines are twice as high as those of comparable onshore turbines. Around 20,000 MW of electric capacity is currently installed in wind farms in the North Sea, the Baltic Sea and the Irish Sea. Plants with an electric capacity of a further 35,000 MW are under construction or in the planning stage. With around 3,500 hours of full operation per year, the several thousand wind turbines currently generate 70 billion kWh of electrical energy per year; by 2025, according to plans, this figure will be well over 220 billion kWh. The main users of this green energy are Great Britain, Germany, The Netherlands, Belgium and Denmark.

Germany focuses on wind power
In Germany, the expansion of offshore wind power production is proceeding at full speed. At the end of 2017, almost 1,200 wind turbines in 20 offshore wind farms with a total capacity of 5,400 MW were connected to the grid off the German coasts. According to information from the German Wind Energy Association, wind energy accounted for around 105 billion kWh in 2017, or about 18% of German power generation (600 billion kWh). This means that the electrical energy from wind power is about as large as that from photovoltaics, biomass and hydropower combined.

In 2017, around 20 billion kWh of the power generated by wind turbines came from offshore wind farms - 50% more than in 2016. The German government is relying heavily on wind power for the coming years: By 2030 a wind power capacity of 15,000 MW is to be installed (about 50% each onshore and offshore), which will then generate at least 200 billion kWh of electrical energy. This corresponds to about one third of the current total power consumption in Germany. On the basis of the Renewable Energy Sources Act (EEG), the initial remuneration for offshore wind turbines is currently 15.4 cents/kWh for the first twelve years and 3.9 cents/kWh thereafter.

Nordsee One supplies 1,200 million kWh of power per year
The Nordsee One wind farm is located about 35 km north of the island of Juist in the southern North Sea. It has a total area of 41 km²; the water depth ranges between 26 m and 29 m (see Figure 2). The average wind speed is 10 m/s. Almost ten years after the German Federal Maritime and Hydrographic Agency (BSH) gave the go-ahead for the installation of the wind farm, construction of Nordsee One began at the end of 2015. In April 2016 the foundations for the 54 wind turbines were completed; in the summer the offshore substation was constructed, and at the end of September 2017 all 54 wind turbines were installed.

Nordsee One went into operation in December 2017 and has been supplying green electricity ever since. 54 wind turbines with a rotor diameter of 126 m and a rated output of 6.15 MW each are used. The wind turbines start at wind speeds from 3.5 m/s and reach their maximum output at about 12 m/s. The rotors have a total area of 12,500 m² – the size of one and a half football pitches!

The total output of all 54 turbines is 332 MW. The operators of the wind farm anticipate an electric energy of around 1,200 million kWh per year at around 3,600 full load hours. This power corresponds to the annual consumption of around 400,000 households and saves one million tons of CO2 per year, which would otherwise have to be produced in power plants for electricity generation. It is planned to operate the wind farm for at least 25 years.

Operational reliability is the top priority
Wind farms that are often located many kilometers offshore must have maximum operational reliability. In case of plant failures, the operator loses a substantial amount of money due to the high yields of the MW plants. Necessary repairs can often be delayed by several days due to the weather conditions. In heavy seas, the service teams are exposed to high stresses and strains as a result of several hours of travel and difficult transitions from ship to wind turbine. While transfers by helicopter are faster, they are more expensive and often have to be canceled in fog and strong winds. Electronic remote monitoring and redundant systems are therefore standard for wind turbines, as are regular inspections and maintenance of the foundations, rotor blades and all electronics carried out by specialist companies.

Condair GmbH, Garching, supplied a total of 54 type DC 75 dehumidifiers for the Nordsee One project (see Figure 4). To protect them against excessive humidity and corrosion, the air must therefore be continuously dehumidified to a relative humidity of around 50–60%. The resulting condensation is discharged continuously and automatically. With the Nordsee One project, these rooms measuring approximately 135 m³ (diameter of 5.5 m, height of 5.7 m) each, in which the dehumidifiers are used, is located at water surface level (see Figure 5). The compact DC 75 dehumidifiers (dimensions: 800 mm x 820 mm x 400 mm) work with a refrigerant circuit (refrigerant R410A) based on condensation dehumidification (falling below the dew point of the air).

With an air capacity of 800 m³/h the maximum dehumidification capacity is 73 l per day. A unique feature of the units supplied to Nordsee One is the special, extremely high-quality offshore design, offering maximum protection against the aggressive, salty sea air. This includes a stainless steel housing, robust special copper/copper heat exchangers and a special paint finish for the EC fans and the insulated refrigerant pipes. The IP66/67 compliant device electronics (including fault management) are located in a separate electrical box. Demand-driven hot gas defrosting ensures economical operation even at low room temperatures.